How To - Immersion Dyeing (Part One - Single Colour)

Also referred to as kettle dyeing, and probably my least used method of dyeing yarn so far. Until recently, most of the yarns I dyed were multi-colour, and I didn't have a whole lot of interest in solid or semisolid colours. But I recently discovered a mosaic sock pattern that I wanted to try, so I decided to do a solid colour.  Here is the first pair I made, and this blog post will show you how I got the solid colour

What you will need
Step 1 - Soak your yarn
Because we are going to be immersion dyeing the yarn, and are going for a solid colour, the yarn should be soaked in plain water, with no acid. This way the colour will absorb more evenly
Step 2 - Prepare your dye stock
For this yarn, I started with just Ghoul Aid (A Halloween special edition of Kool Aid). I started with 5 packages. I also added my 1/4 tsp of salt to this mixture, but you can't really see it in the picture. To ensure the salt was dissolved, I mixed the dye stock with very hot tap water.
NOTE: For the final yarn that you see, there is a total of 10 pkgs of the Ghoul Aid and 20 drops of Wilton Color Right black dye. I will try to remember to add info in the post as I go along as to where I added more. I also think I added too much in total, so if you are trying this.... use about 1/3 less than what I used

Step 3 - Dye your yarn
I removed the yarn from the water, squeezing out a fair amount of the water, and put in on a plate off to the side. I then added the dyestock to the water, mixed it well, and slowly added the yarn back in. The theory being adding it slowly will help with a more even colour distribution.  I turned the heat on medium and let the water come up to temperature
After about 30 minutes, the dye was almost exhausted, but I realized the yarn was not going to be anywhere near as dark as I wanted it. I didn't have a specific colour in mind, but I had depth of colour in mind, and this was not it.  I mixed up three more packages of Ghoul Aid with 10 drops of WCR black in the same glass I used before. I removed the yarn from the water, added the new dyestock, then added the yarn back in.  This time I got a very dark colour, that seemed to have hints of red and brown in it (probably from the WCR black).

I let the yarn go for another 20 minutes or so, and even though I know there was a lot of citric acid from the Kool Aid, I still added one tablespoon of my liquid citric acid mix to help move things along. I highly doubt I needed to do this, and probably should have just used one of my pH strips to test the water (when I do test it, I aim for about 4, unless there is red #3, then I go for 6), but old habits dye hard, and since I normally only use food colouring, I think I added the citric acid in auto-pilot mode.

Be careful if you are using your tongs or other utensils to check on your yarn. It is better to just leave it alone as much as possible. I have a tendency to poke at it a bit much, and have tangled it up quite nicely a few times. If you must look, try to make sure you are picking it up near the ties. That way you at least have a hope of keeping it untangled.

Step 4 - Cool, wash, rinse and dry your yarn
As with all other dyeing I do, I am impatient, so I used my tongs to pull it out and put it on a plate to cool faster. I dumped my dyestock and washed out my pot, then put the yarn in the sink to wash it. And guess what? I tool pictures of that part for once!
Once my yarn was washed and rinsed, I wrapped it in a towel to get out as much extra water as possible.
After it is wrapped, I put one end of the towel on the floor, hold it down with my foot, and twist the ever loving crap out of the towel to get out as much water as I can.  I then put my yarn on the shoe rack in my dryer to speed up the drying process
After the yarn had dried completely, I was relatively happy with the colour, but noticed that around the areas where it was tied, even though it was tied incredibly loosely, there seemed to be some really light spots.  If they had been a lighter version of the brown I had gotten, I would have been fine with that, but they were actually a lighter version of the grey that the first batch of Ghoul Aid gave me. And they were big enough spots that I felt it would really impact the mosaic pattern if I knit with it, so I decided to overdye the yarn.

I soaked the yarn again, although I don't think I soaked out long enough this time because I was in a rush. I mixed up 2 more packages of Ghoul Aid and about 10 drops of WCR black. After 8 drops the bottle started just giving me air, so I filled it with water to get the rest out, which I think gave me about 10 more drops.  In retrospect, I probably could have done maybe 1 package of Ghoul Aid and 5 drops of black and would have gotten what I was going for.  I then repeated steps 3 and 4, including adding another tablespoon of citric acid.
The dye seemed to almost exhaust, and I used my "close enough" rule for the colour on this second round of dyeing.  Rinsing this one out took about half an hour or more, and I lost a LOT of brown and green in the rinse. I have a bad habit when overdyeing to oversaturate the dye. And then spend more time washing the excess out than I did dyeing the yarn. But I did manage to get rid of almost all of the light spots. I did find one little spot when it was done, but I wasn't about to overdye a third time.

After the yarn was completely dried, I wound up with this skein, which I called Dark Chocolate. In certain lights it has almost a purple look, but most light shows it as a dark brown with some red highlights. You can still see some very faint spots where even with the overdyeing, the grey showed through, but they appear to only be a couple of stitches worth, so I did not worry about them So far I haven't seen them on any of the three socks I have knit.
And when used with a different colour, it really appears brown.  Here is my second attempt at the mosaic pattern I showed at the top of the post. 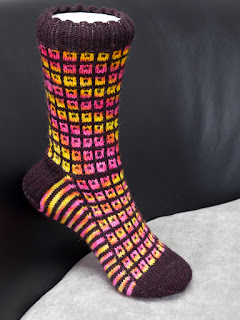 On the next instalment of The Impatient Dyer....
I am going to do something that I know a lot of people do, but have not tried yet. It will be a part two of the immersion dyeing, but I will be dyeing the skein in one colour while it is twisted, then taking it out, re-twisting it, and dyeing it a second colour. I may even do three, depend on how well it works.

Until then, happy dyeing!
Posted by Miss Reena at 3:18 PM

The "How To" Posts